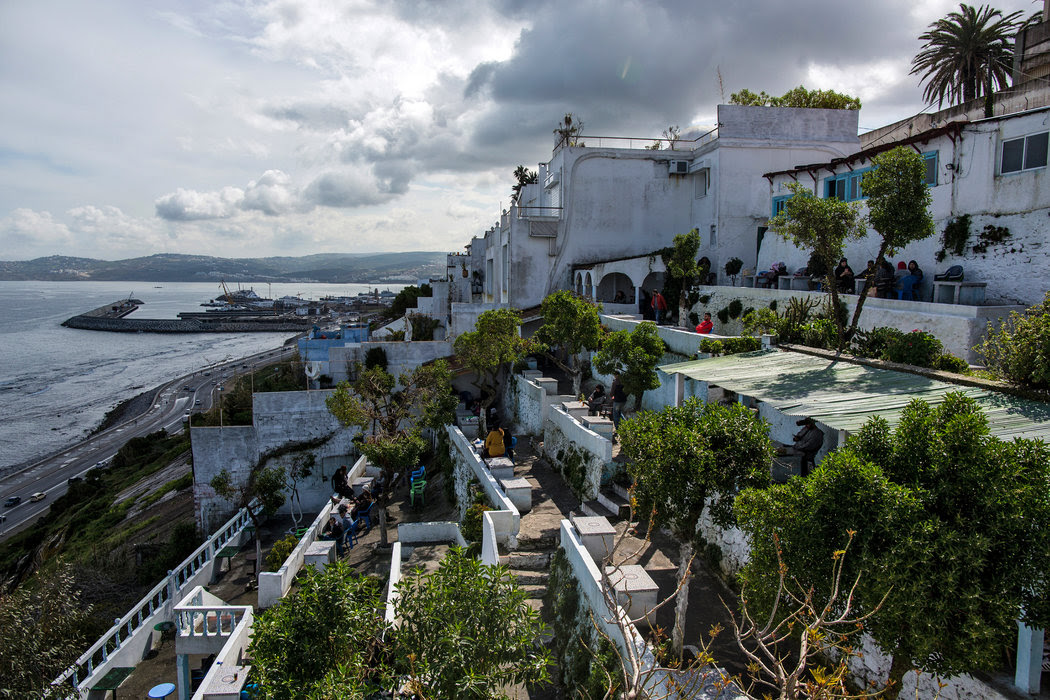 Tiers of terraces descend to the Mediterranean at the beloved Café Hafa. Credit: Daniel Rodrigues for The New York Times

They all rushed to Tangier. From the 1920s to the 1950s, when the Moroccan port city was a freewheeling “international zone” governed (barely) by a consortium of mostly European powers, Tangier attracted expatriates and travelers seeking illicit substances and activities in a palm-fringed seaside crossroads where Africa almost touches Europe. Barbara Hutton, the Woolworth heiress, and the billionaire Malcolm Forbes built palaces and hosted celebrities. Beat writers, from William S. Burroughs to Paul and Jane Bowles, wrote in a haze of drugs and booze. And the future enfants terribles of Moroccan literature, Mohamed Choukri andMohammed Mrabet, stalked the cafes. Reviled, the Moroccan monarchy let the city decay. By the 1970s Tangier was a seedy has-been.
Today the city is undergoing a turnaround. Prized by King Mohammed VI,who assumed the throne in 1999, Tangier is building a huge new port, a green seafront and Africa’s first high-speed train line. Monuments and museums are getting face-lifts, and the streets of both the centuries-old Moorish medina and the colonial-era neighborhoods are sprouting boutique hotels, design shops and Euro-Moroccan restaurants. There’s even an electro festival, Nuits Sonores Tanger, created in 2013 and held in October. Couple those with classic draws — long beaches, artisanal goods, a thriving cafe culture — and Tangier is ripe for a global return.

Boulevard Pasteur, a.k.a. “Le Boulevard,” begins your unpasteurized plunge into colonial-era Tangier. Lined with Art Nouveau and Art Deco edifices, the bustling thoroughfare is packed with cafes, clothing shops and banks, as well as a scenic esplanade offering Mediterranean views. Side streets like Rue Khalid Ibn Oualidbeckon with antiques and souvenir shops, but the most rewarding stop is Librairie des Colonnes. Owned by Pierre Bergé, the former partner (in business and in love) of Yves Saint Laurent — a longtime homeowner in Tangier — the multilingual bookshop stocks essentials for your Tangier adventure, from street maps to indispensable tomes like Josh Shoemake’s “Tangier: A Literary Guide for Travellers.”

Nearby, the venerable Gran Cafe de Paris and the hip cafe in theCinémathèque de Tanger are windows into the spirit of Tangier, classic and contemporary. The former is a Gallic-flavored institution that fills with the (mostly) older generation of Moroccans and longtime foreign residents, who sip café au lait on banquettes once haunted by Jean Genet and Tennessee Williams. The cafe inside the Cinémathèque, an independent movie theater and archive that took over a forlorn old cinema in 2006, is awash in retro-cool furniture, fresh juices, Moroccan cool cats, arty expats and free Wi-Fi.

A photograph of King Mohammed VI beams down from a column in Saveur de Poisson, a small, rustic restaurant decorated with folkloric art. Perhaps he can smell the briny bounty, which varies with the season and tides. The day’s fresh fish offerings might include soup, a sizzling dish of calamari and monkfish with spinach, brochettes of baby shark, and a grilled sole. The purple house juice, a mix of pomegranate, fig, carrot and more, accompanies it all. Two hundred dirhams(about $21) per person. 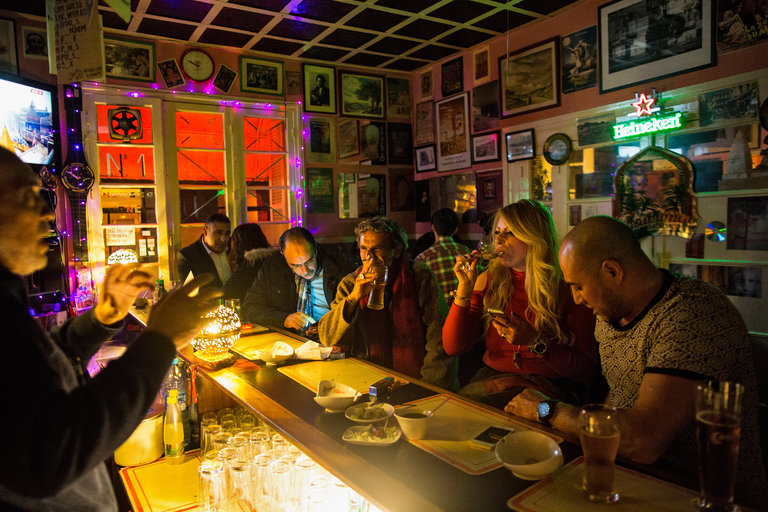 Rue Magellan should be renamed Beat Street. Its hotels were favorites of Jack Kerouac, Allen Ginsberg and Burroughs, who was a fixture at the Hotel El Muniriaand its bar, the Tangerinn. The décor has changed (black leather couches, wall-mounted vinyl LPs) as has the crowd (20-something Moroccan hipsters), but Burroughs still haunts the spot. His hangdog face forms a sizable mural, and quotes from him are stenciled on the walls. These days, Tangier’s expat writers, artists and self-styled deviants congregate three blocks away at Le Number One. The friendly dive is festooned with kitsch décor and stocked with Casablanca beer (40 dirhams)and myriad liquors.