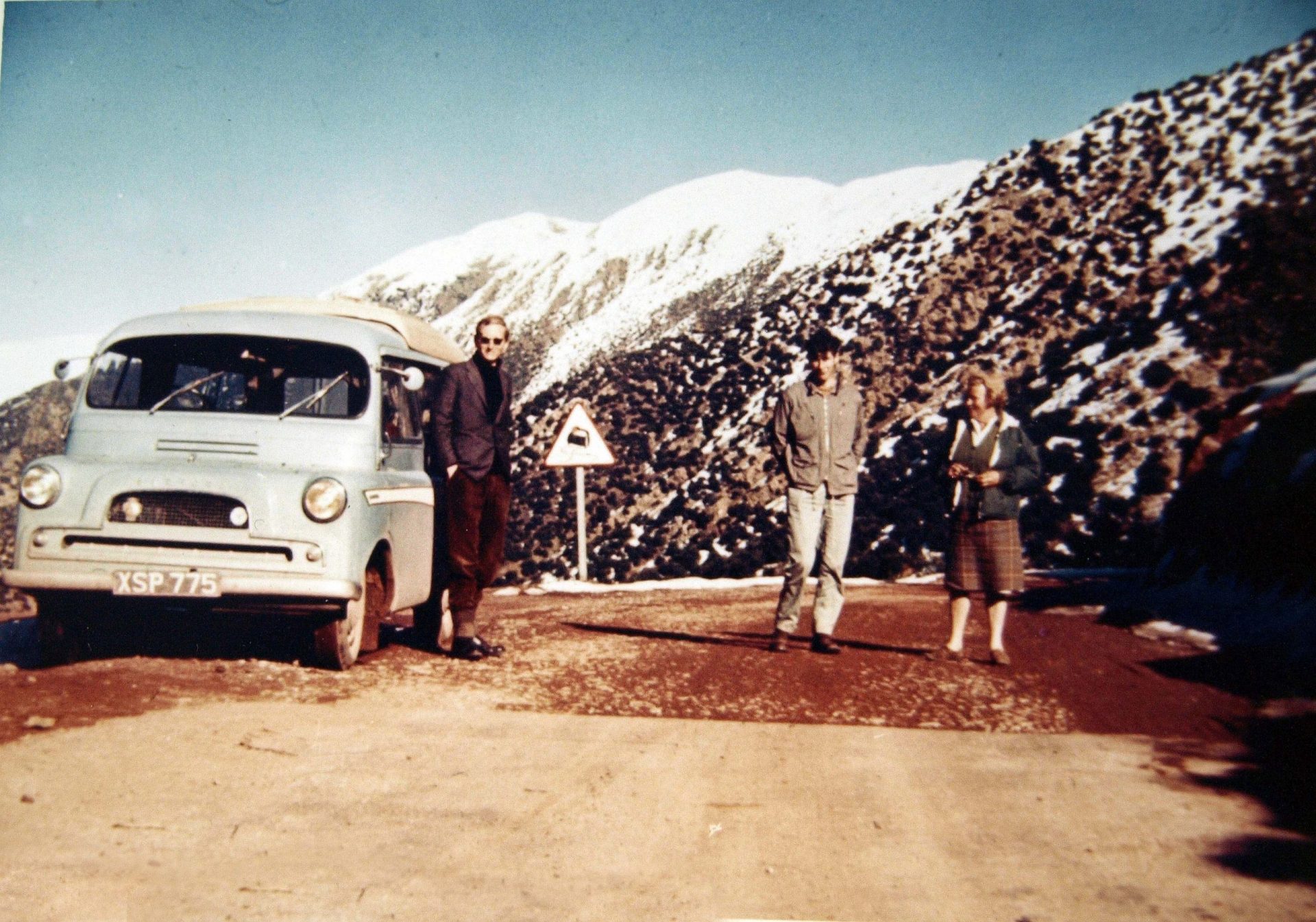 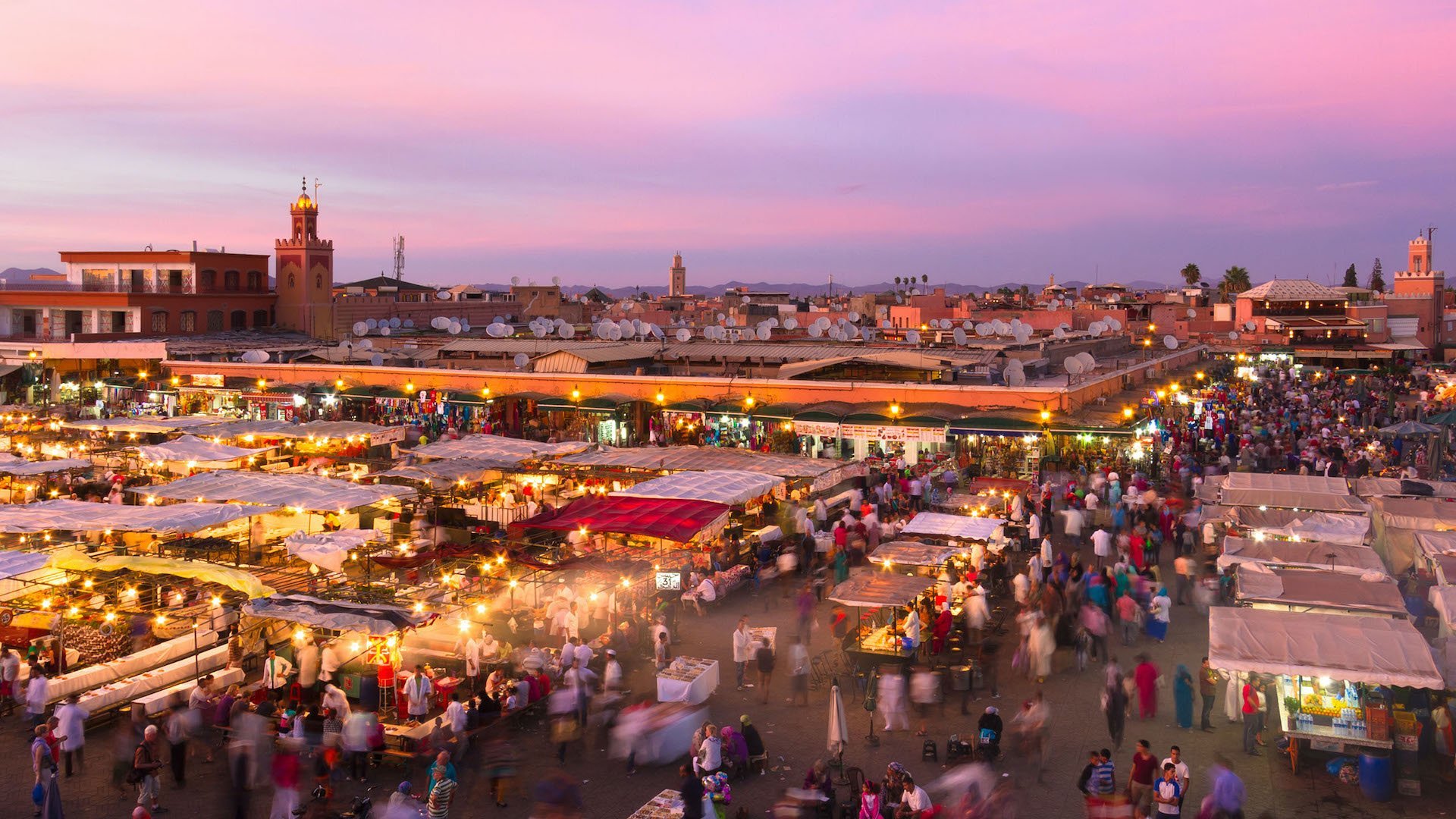 It was January 1964, aged 18, when my first visit to Morocco began. My companion was waiting to go up to Cambridge and the start of my RAF jet flying training was waiting for me at the RAF College, Cranwell later in March. Using buses and the odd lift we spent two wonderfully happy months travelling south to Guelmim via Marrakesh and returning along the coast to Tangier, staying in Agadir on 29th February – exactly four years after “la catastrophe”. Only the first night in a hotel in Tetuan and then our flimsy tent. Those lasting early memories of friendly hospitality everywhere made a lifetime impression boosted by later re-readings of my diary. We were very naive and undoubtedly started with no real understanding of the culture around us nor the full meaning of the Holy Month of Ramadan which was in January that year. We may have read some of Rom Landau’s books published a few years earlier but there was no internet or mobile phones then anywhere in the world. We did have a World War II ex British Army map of Morocco. Families back home received weekly letters. Then, years later in Rome, a distinguished Rector of a Vatican College explained to me that an intellectual understanding of each important condition of life was not enough. One should try to live some such experiences at least for a few months. My eldest son then had a wonderful time in India upon leaving Winchester and before university in the 1980’s, benefiting from much the same experiences as mine in Morocco and sponsored, in part, by The Prince of Wales Trust.

Me in sunglasses! February 1964

So, the idea was born of arranging such important experiences for future young people to visit Morocco. A fine organisation, Voluntary Service Overseas, then existed but was for a full year and mainly operating in British Commonwealth countries. Then in the early 1990’s there was little else except private arrangements. One strong supporter for our first group of volunteers [on advice, all male students] was the late Rev. John Grumitt SJ [of The Young British Jesuits but not in any way for proselytising. He readily understood that having had a few years of full time [and full-on] Catholic education, such students should live amongst another faith. It was also a time of growing misunderstanding in the UK of the true values of Islam. In addition, Father John had access to substantial funds to provide almost 100% financial support for each student so that several were able to make the visits whose families would not otherwise have been able to support them. Later, once we were up & running [soon with men & women participating] and something to show, we arranged student support from a range of generous donors such as The Mercers’ Company in the City of London, The Marquis of Bute’s family trusts in Scotland and the Gibraltar Chamber of Commerce. 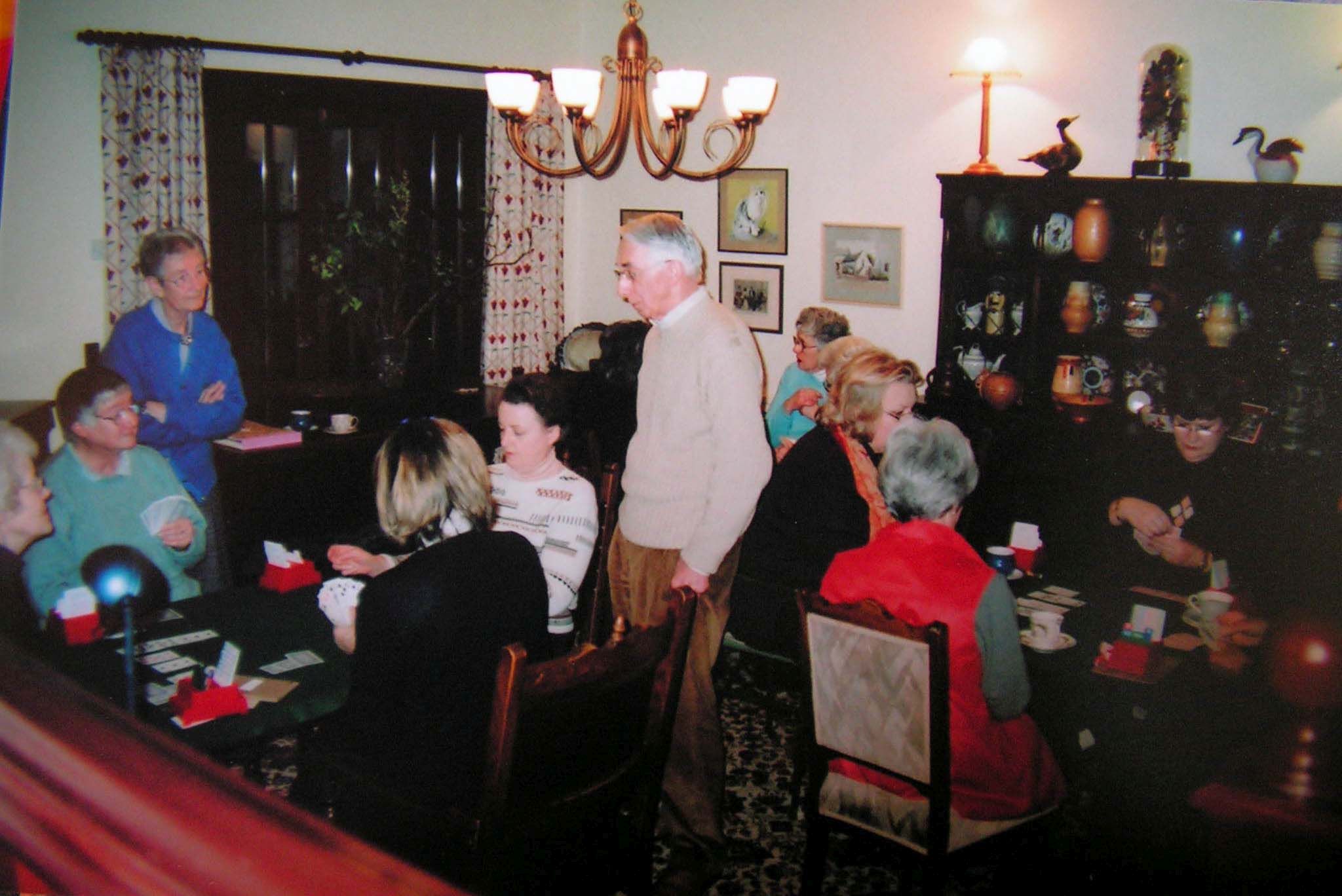 At first it was an existing UK Registered youth charity, St. David’s (Crickhowell) Trust, based in the Welsh Brecon Beacons which was the umbrella organisation that arranged the visits. Later it was a Gibraltar registered charity [with the same regulations as the UK] named St. David’s (Africa) Trust which “hosted” the volunteers. The then Coopers & Lybrand audited the accounts, almost pro-bono, as it had been my old firm in the City of London in the 1960/70’s. The UK office was in the house of good friends, the late Brian Wintle and his wife, Suzanne who generously gave so much of their time to the project. They conceived a splendid idea of the Africa Bridge Club which was registered as a UK Charity. The concept was that of a “Bridge” between Europe and Morocco. The practical part was that Brian & Suzanne hosted weekly meetings of the card game “Bridge” which proved very popular in that part of Wales. The weekly donations proved enormously helpful and the [often retired] players learned about [and occasionally met folks from] places of which they had no firsthand knowledge.

Taroudant was selected as the base in Morocco for mainly selfish reasons as my favourite walled city in Morocco. In practice it was for two very much more important reasons. His Excellency, the then Governor of Taroudant had extended a most generous welcome and it was the home of my very good friend, Mohamed Bouazza and his family. Mohamed had already stayed with my family in Hampshire and knew how “challenging” it can be managing young English people! Mohammed joined our team as Head of House in Taroudant and together with his family kept the volunteer team out of too much mischief and mistakes. It was also Mohamed who selected others to help with the two-week induction course of improving French, teaching basic Arabic, some Berber and in explaining the all-important culture and customs. 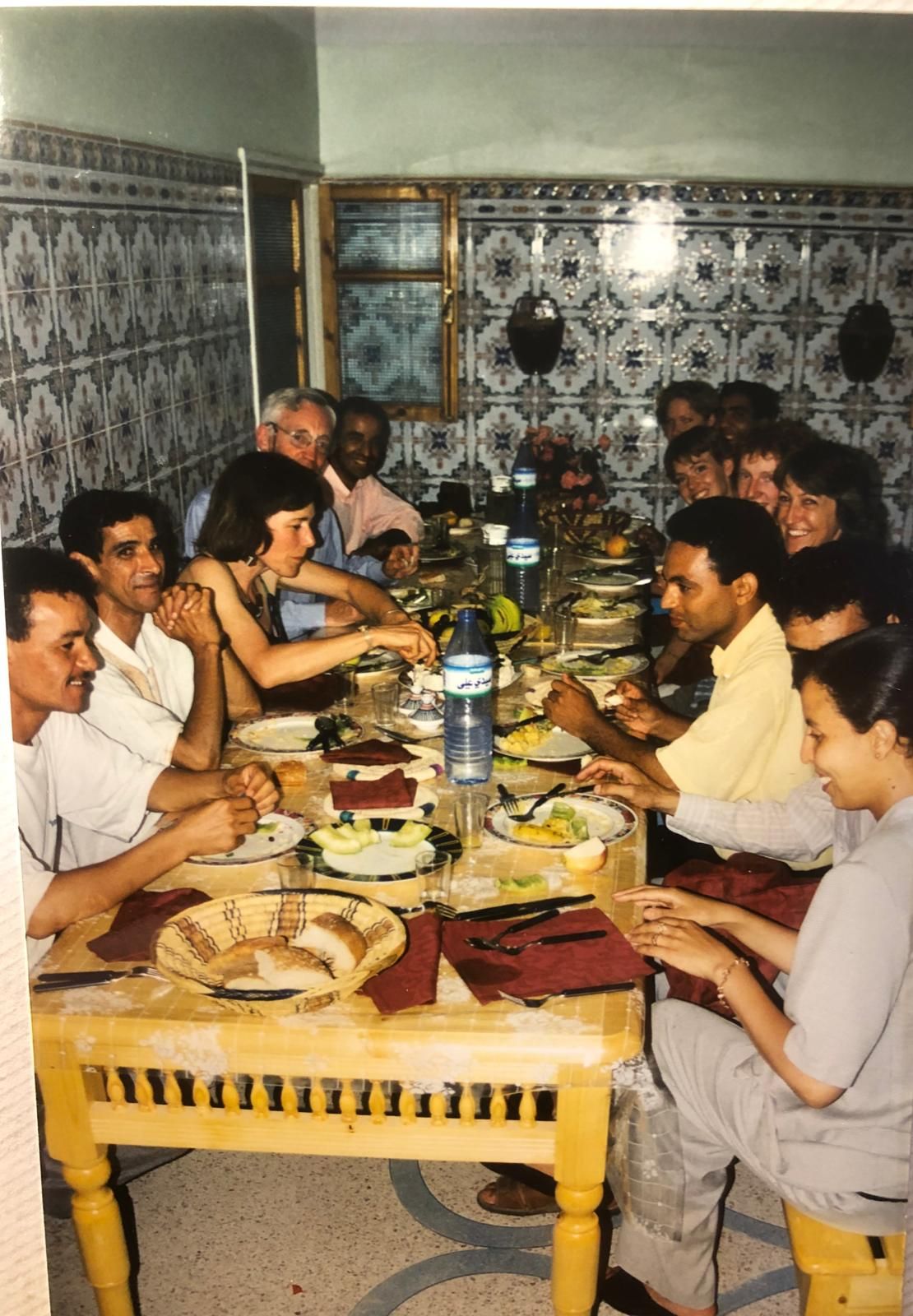 We also arranged  for other Moroccan colleagues to visit England. In particular, our three friends on the left of the above photo at a 1997 party in Taroudant generously hosted by Jane Bayley (a founder of Eco Lodge) being Mohamed Akhbar, Mohamed Bouazza and Kacem El Mallouli who each stayed with my family in Hampshire or Devon at different times.

Our projects were all “youth orientated” so that our volunteers were amongst a peer group. But these were never “virtual experiences”. The reality was that all the young people involved gained a better understanding with each other. For example, learning how many mosques there were in Britain surprised many in Morocco as did the strong presence of Christian churches and synagogues in Morocco surprise many visiting volunteers. Students returned very impressed by the calm mix of cultures in Morocco that reflects such a rich Islamic country. Now, almost 30 years later, such an awareness of what is possible is needed more than ever before as the worst parts of the media seem to delight in presenting harmful stereotypes. Our favourite saying in those days was “Better a Good Neighbour than a Distance Relation”. Our initial projects were in Taroudant at the orphanage [young British men helping to change nappies was a surprise for many] and the School for Young Visually Impaired. 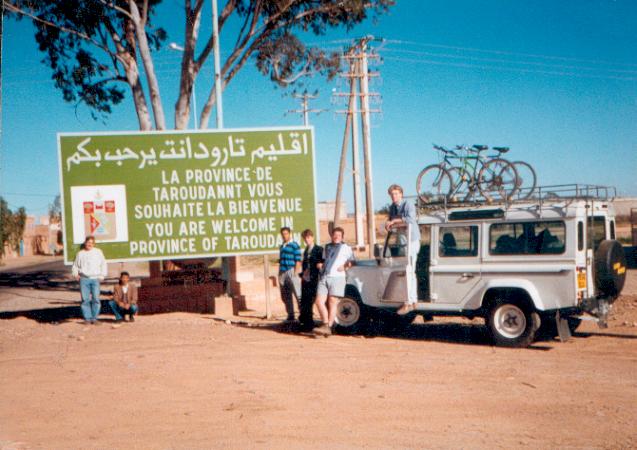 Part of the First team in Taroudant 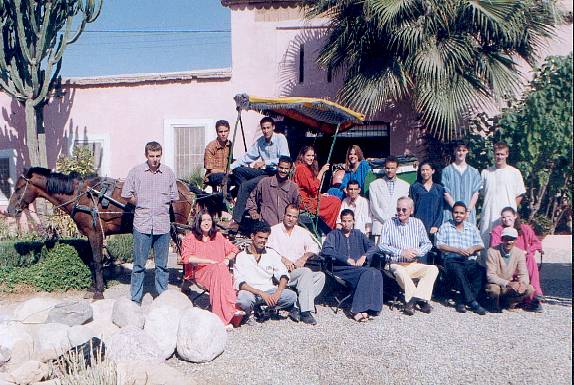 We subsequently also had volunteers [always after a two-week language/culture induction course in Taroudannt] in other locations such Tetuan, Khemisset, Casablanca and Marrakesh. The residential home for young people with disabilities in Khemisset was a particular favourite as our “Team Leader” there, Kacem El Mallouli, and his very hospitable family were very popular and thoroughly spoiled the volunteers. We worked with L’Entraide Nationale or Entre-Aide Nationale as described by Rom Landau in Morocco Independent published in 1962] which had been set up in the early days of Morocco re-gaining its independence, coming fully into existence in 1958 under the fine leadership of Princess Lalla Ayisha, daughter of King Mohamed V.

Educating rural women and providing child welfare were two important aims from the beginning. Being close to Rabat it was a useful place for visiting British VIP’s to be taken by the British Embassy. Madame Speaker, Betty Boothroyd, from the House of Commons visited whilst our students were there, and HRH The Princess Anne had visited when Kacem was a young boy there. At the half-way point there were structured recreational visits to Mt Toubkal as well as into date palm groves [owned by Moroccan friends] on the edges of the Sahara Desert, helping with pollination in the spring and the harvest in the autumn. Parents/families of volunteers were also welcome to make short visits later in the programme. Such visits were important for spreading the message and, sometimes, for the volunteers who had never been away from their families to re-establish any awkward relationships given their new confidence. My youngest son joined us on several occasions to help. Following his football [soccer] successes at Eton he was soon in the Taroudant Team but was initially surprised by how much time was needed to clear the livestock from the pitch! With his experience in Morocco, he was also a great help later in setting up another volunteer programme in Ghana. 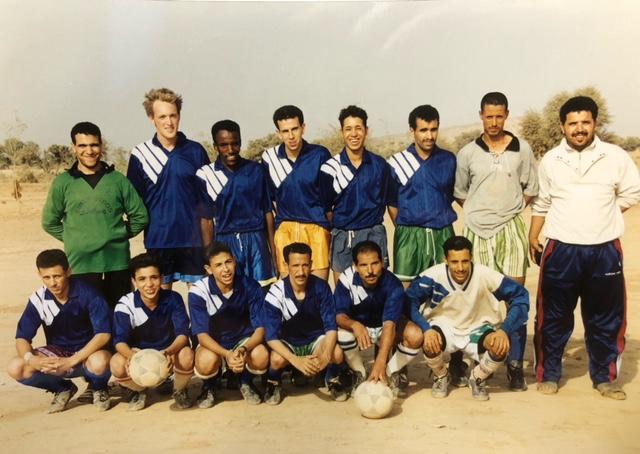 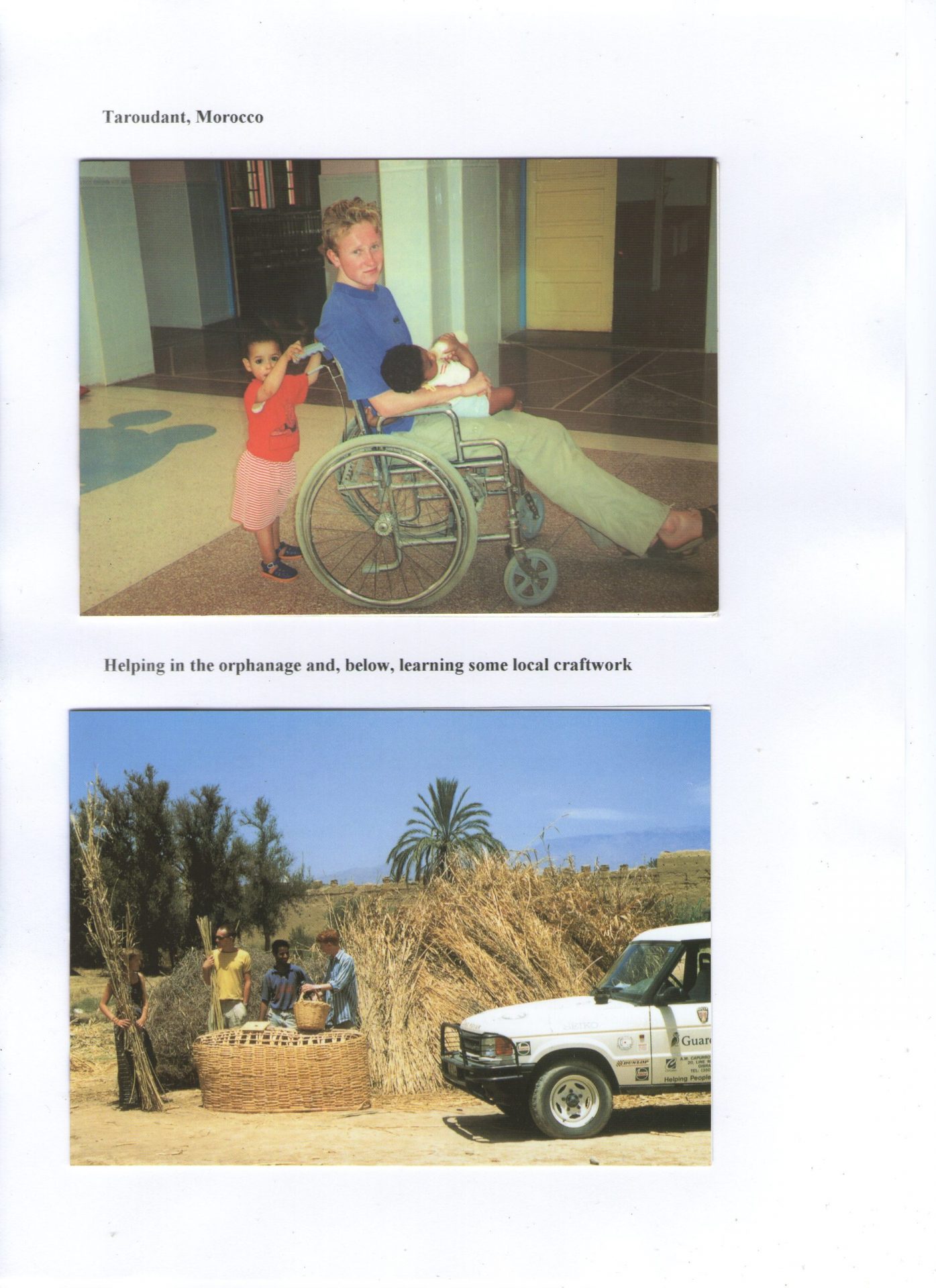 Then calls on my time at other volunteer projects we had started in Ghana, Mali and Cameroon meant there was a more focused need for the project in Morocco. This was especially so as the commercial “GAP Year” industry started to emerge. There was a need to focus professionally much more on child-care. It was very fortunate that Dr Chris Hands [then an Anglo/French First Class Honours Graduate from Cambridge] came upon the scene. Chris was a medical student at St. George’s Medical School, London and is now a Consultant Paediatrician. A new structure was created as the UK registered charity, Moroccan Childrens’ Trust and the rest, as they say, is history. Chris and his international team have developed a fine record with many such as UNICEF now recognising their excellent work still based in Taroudant. For me it is a joy to have my eldest son as a family Trustee at MCT.

For now, the Charities Commission of England & Wales currently has 27 registered charities with a specific interest in Morocco. It may soon be time, perhaps, for more “joining of the hands”. 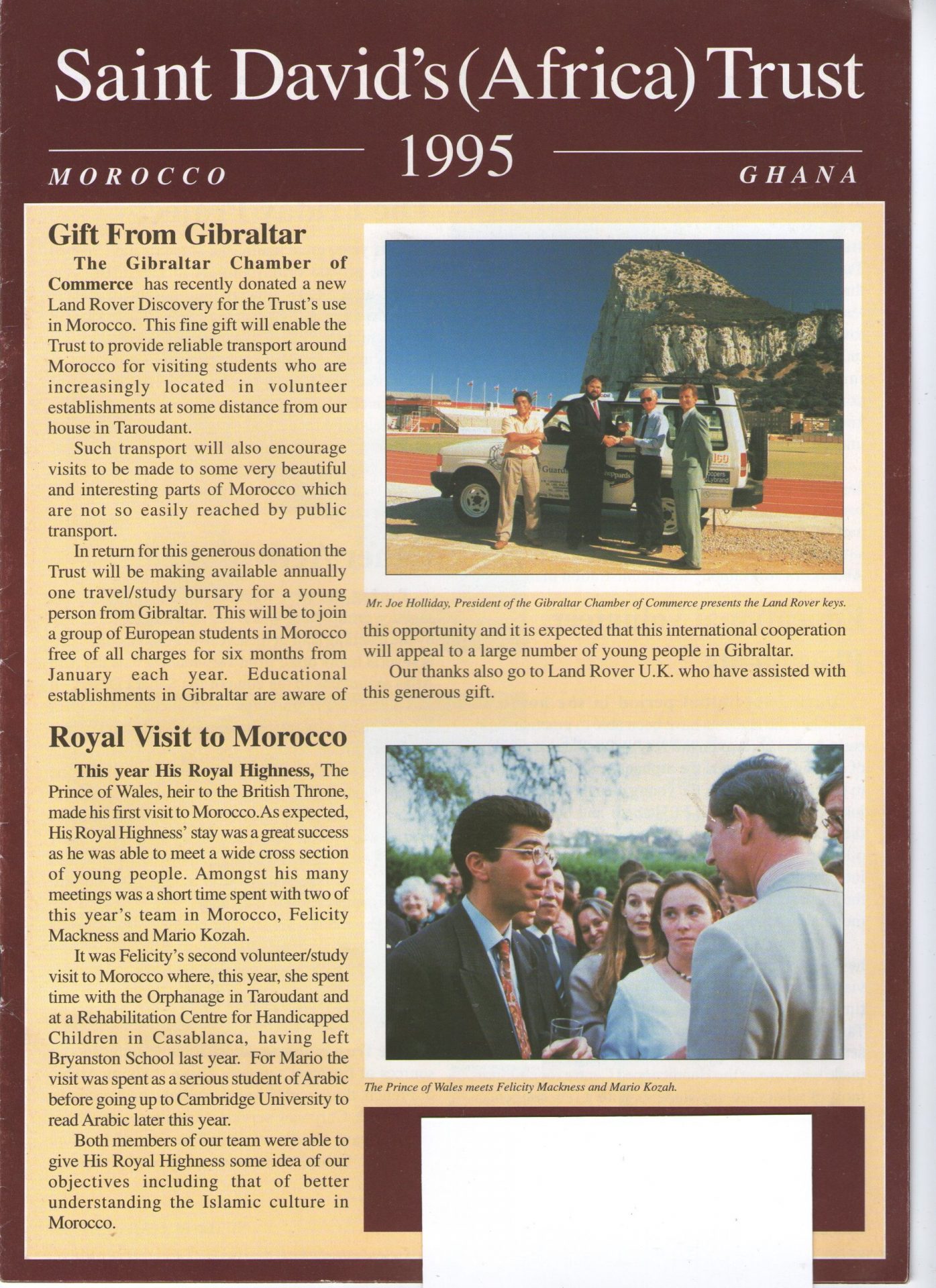 Visit of Madame Speaker of House of Commons 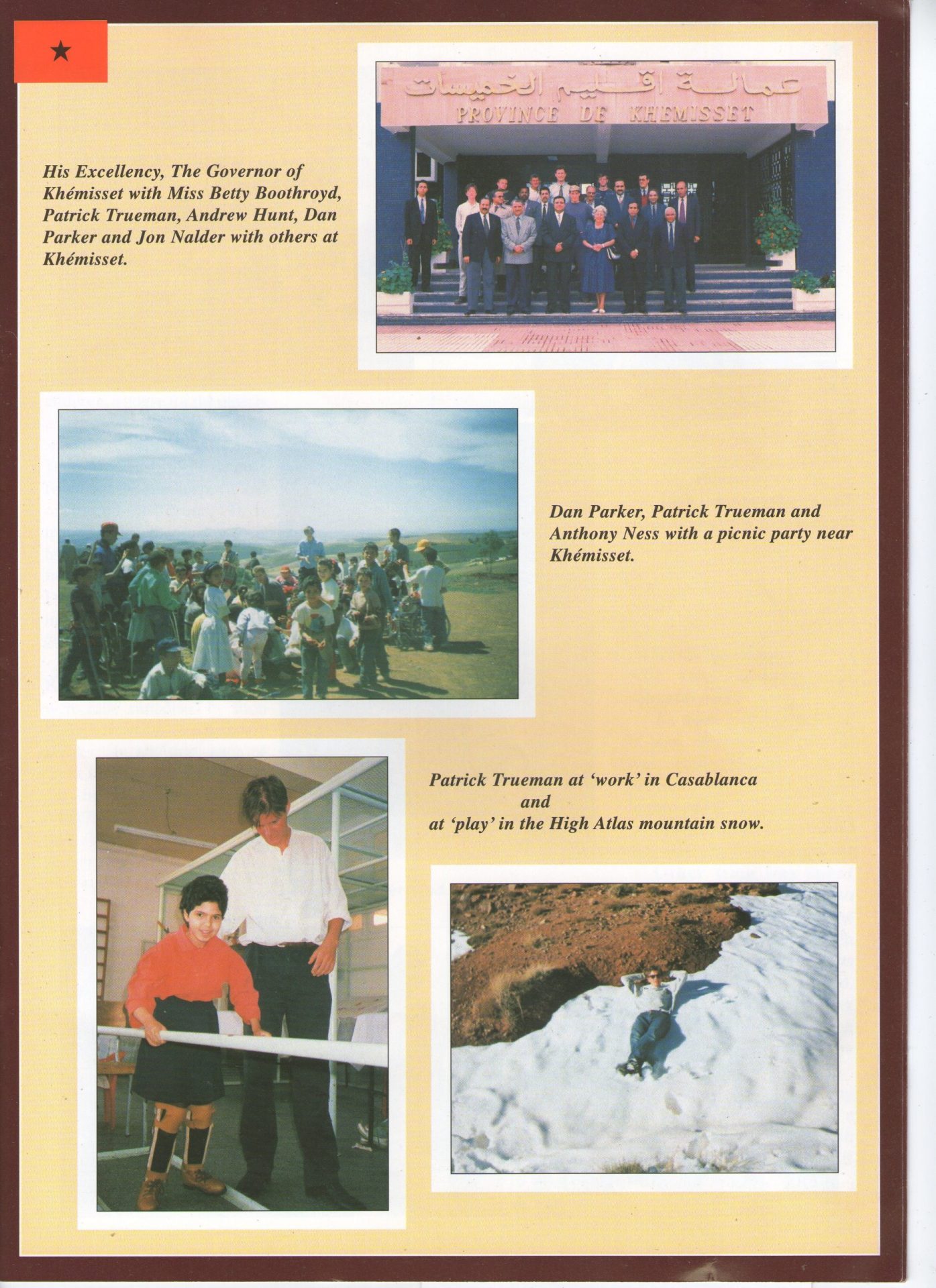 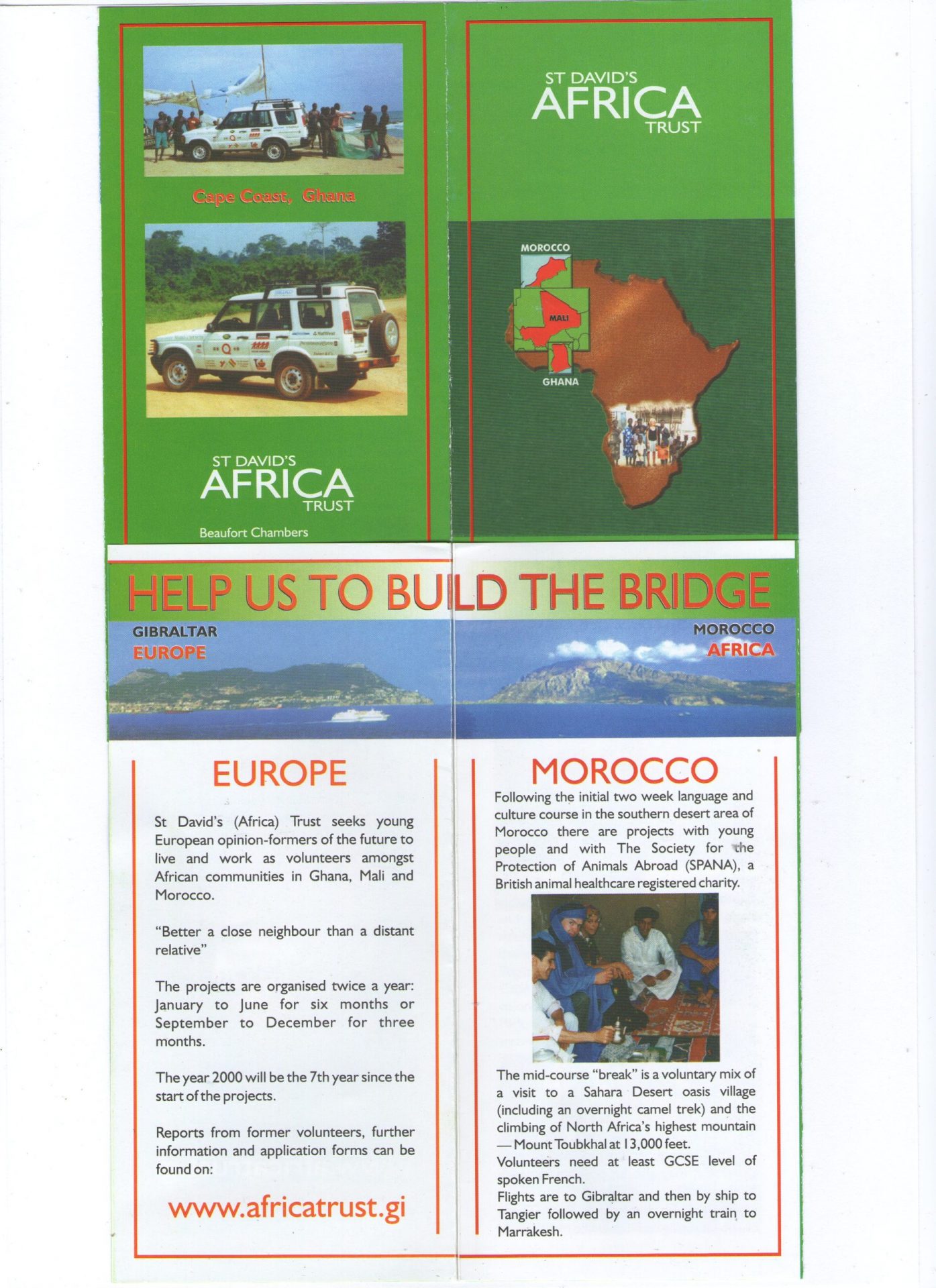